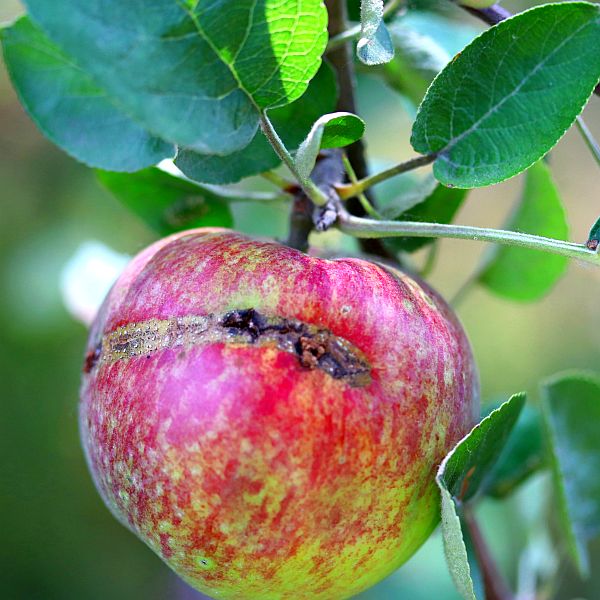 Apple sawfly larvae can damage apples at the fruitlet stage in late spring to early summer, affected fruit tend to drop off in June. Although sawfly is as widespread as the codling moth, the damage is different and the two should not be confused. With codling moth maggots are found in apples in late summer.

What is Apple Sawfly?

Adult apple sawflies are small winged insects which are active usually late April-May and can be seen entering apple blossom. They lay eggs at the base of the flowers which hatch after petal drop. The larvae are like caterpillars, they are 4-5mm long, the head and thorax are almost black and the abdomen is brown.

The larvae tunnel just under the skin of young apples, causing scarring, then they burrow further into the fruit. The damage causes affected fruit to drop in early summer. If the larva dies before reaching the core, the fruit can survive but it will have a scar on the skin where the early feeding took place.

When fully fed, the sawfly larva is about 10mm long and has a brown head and white body. The larva can damage 3-5 fruitlets before completing its feeding it then goes into the soil, where it overwinters as a non-feeding larva and pupates in the following spring.

In late May and June, damaged fruit have obvious holes. Affected fruit usually drop off the tree as part of the June drop (when apple trees shed excess fruits) If only partially damaged the fruit can be misshapen and scarred.

Apple sawfly is as widespread as codling moth and often mistaken for codling moth. Non-pesticide control of apple sawfly From April until June, hang sawfly traps in fruit trees, simple to use and effective, the traps will give you an indication of how severe the problem is.

Use grease bands on trees to stop the overwintering pests from climbing the tree in the spring. Wash the tree with a tree wash at the end of the season, this removes dirt and debris which overwintering pests can hang on to use apple sawfly traps to ensure that is what is causing the damage. Pick off damaged fruit when they are seen to prevent the larvae moving to other fruit or going into the soil to pupate.